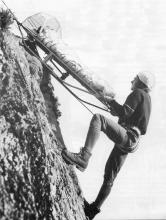 A Brief History of Mountain Rescue in Langdale & Ambleside

Mountain rescue in the Lakeland fells has been going on for many decades, in fact ever since people started disappearing into the hills and not coming back. Records exist in the form of taped interviews with people who played their part in rescues as early as 1930.

In those days, local St John's Ambulance Brigades played a large part in organised rescue, but these brigades only existed in towns. The rescue of people in the remoter areas was carried out by farmers, shepherds and anyone else in the vicinity who had the time to spare. Equipment was minimal, and there are many tales of searches taking place under appalling weather conditions where the rescuers themselves were at serious risk from inadequate clothing and having to use anything to hand to try to effect evacuation of badly injured victims to safety. Tales of using 5-bar gates as stretchers are not all invented!

The earliest formation of organised and dedicated Mountain Rescue Teams were in Coniston and in Keswick in the 1940's. Controversy exists over exactly which team was formed first, but it was the well-known mountaineer Jim Cameron in Coniston and the equally well-known Rusty Westmorland in Keswick who saw the need for trained teams and set about forming them.

The 1950's saw a huge increase in the numbers of people who took up rock-climbing as a sport. It was during this period that climbing became more accessible to the ordinary man, as opposed to the leisured classes whose preserve it had previously been. With a post-war increase in affluence and increasing personal mobility, many lads from the northern cities began to make weekend tracks to the Lakes, camping rough or in farmers' barns, especially in Langdale, and many of them were later to become modern climbing legends.

Unfortunately, lots of them started falling off crags and desperate and dramatic rescues became more frequent. In Langdale, these tended to be co-ordinated on a very ad hoc basis, first by Cyril Bulman, licensee of the Old Dungeon Ghyll Hotel with his wife Sally (Sarah), and then by his successor, Sid Cross. Sid was an expert climber and his charismatic personality was just what was needed to gather a group of fellow climbers whenever someone had failed to return or been reported as injured.

This was fine, but relied rather a lot on enough climbers being in the right place when an incident occured. So with a few locally based climbers, such as Sid's two sons John and Edward, Frank Davis, Peter Greenall, Clifford Downham and Dick Cook, Bryan Marsh and Pete Deeley, the nucleus of a team was formed which was locally available and which could be called out by telephone. This worked well in Langdale, but the team started to get called out to the Ambleside area and elsewhere. Call-outs were not as frequent then, but often were very lengthy affairs and the heavy and cumbersome equipment available, such as old Thomas stretchers, took its toll on rescuers and victims alike.

As the sixties passed and affluence and mobility increased, more and more people wanted to experience 'the great outdoors'. For Lakeland, this meant the beginning of a huge boom in tourism. For mountain rescue, it meant that the client changed dramatically. Instead of climbers, it was the new breed of fellwalkers who were coming to grief on the hills, getting lost, breaking limbs and falling victim to hypothermia and heart attacks. The Langdale organisation were thus often asked to extend their coverage to Ambleside and other areas to rescue not just climbers, but increasing numbers of walkers.

Sid Cross and his team continued to do this excellent work, but were often stretched for man power. In Ambleside, the St John's Ambulance Brigade continued with rescue work and became supported by a new Ambleside Fell Rescue Team, formed by Stewart Hulse, a St John's member, and Peter Bell to support the Langdale Team. Stewart had ambulance experience and was determined to create a dedicated team with first aid expertise. Anxious not to tread on any toes, he sought a means by which his group of keen volunteers in Ambleside could co-operate in providing extra first aid-trained manpower to complement Langdale's experienced climbing rescuers.

After some hesitation, the idea of a new Ambleside based fell rescue team was accepted and a period of happy co-operation began. This was to be cemented not long afterwards in 1970, when Sid Cross retired from the Old Dungeon Ghyll. His successor was not a mountain man and an amalgamation of the two teams with an independent base became the obvious way forward. So instead of using Sid Cross' office in the Old hotel, the present building in Lake Road, Ambleside was acquired and was gradually converted into a purpose-made MRT base. This amalgamation has successfully continued to this day, with some notable 'firsts' to its credit, including the invention of the now universally used Bell stretcher by team member Peter Bell, an engineer who also developed the Reviva, an early device to give first aid treatment to hypothermia victims. Due to its location in the centre of the Lake District, the team has also become one of the busiest in the UK.

The team has since then proudly defended its position as a self-funding organisation, with a dedicated membership of unpaid volunteers, and has been at the forefront of fights against attempts by various politicians and others to create teams of full time paid employees who would be funded out of taxes or compulsory insurance schemes.

Thanks to its good relationships with local people and to many small contributors and fund-raising helpers, together with larger individual donations, the LAMRT has managed to bring itself to the present day with huge experience and expertise in its field, a formidable range of rescue and para-medical equipment, a high degree of communications technology and a training programme second to none. With its proven expertise, it has won the respect of and developed excellent working relationships with the Police, the County Ambulance Service and the RAF, whose Search and Rescue Helicopter Service often assists local teams with emergency evacuations.

It is difficult to imagine how a publicly funded body of salaried rescuers could carry out a better job with the same pride, expertise and dedication that volunteer teams offer. Self-funding means freedom - to experiment, to acquire the best equipment for the job, freedom from bureaucratic interference and cost-cutting to which so many public services have fallen victim, and freedom to enjoy the team spirit which rewards and respects initiative and competence in a way which binds and disciplines a team to the ultimate benefit of all. Until the day comes when anyone can show that a different system could do a better job, our teams should not be forced to defend their proven way of providing Britain's mountaineers with the best rescue organisations that have ever evolved, anywhere.