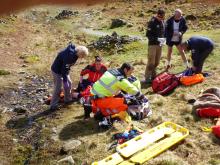 The team uses a large array of technical and medical equipment to cope with the wide range of incidents and conditions we encounter.

Many of the callouts we attend involve injuries - The team's doctors are responsible for maintaining the Medical training standards of members and the equipment. Each member is encouraged to sit the 3 yearly MR Casualty Care examination.

Each vehicle carries a range of medical equipment including

We have a range of technical equipment to handle the various situations we may find ourselves working under:

Crag Rescue
Often we find ourselves responding to people stuck on ledges or who have fallen whilst climbing - personal safety is paramount for our members so when on a crag rescue they will wear harnesses and helmets.

Again personal safety is paramount and team members will wear buoyancy aids and have access to specialist items such as throwbags.

Winter Rescue
There are a number of popular ice climbing routes in our area. Additionally winter weather conditions in the Lakes will often result in severe icing - requiring crampons and ice axes and deep and unstable snow which could cause an avalanche. The team has access to winter rescue equipment including probes, avalanche tranceivers and ice climbing equipment.

Air Crash
There have been a small number of incidents involving aircraft in our area. As a result we have developed an Air Crash kit which will include the necessary articles of protective equipment against aviation fuel and items to help mark locations of debris.

Sheep Rescue
We are often called by local landowners to rescue farm animals (particularly sheep) who have found themselves in difficulties - we keep a specialist kit available for the safe evacuation of animals - including slings and harnesses.

Search Kits
Extended searches or searches in bad weather often result in our locating people who are ill equipped or who are overcome by the conditions - the team has a number of search kits that are carried which will contain extra clothing, a bivvy bag, karrimat, food for the casualty as well as a strobe light to alert the helicopter/other team members.

To ensure we operate safely we have a range of communication equipment.

Pagers
Each full team member is issued with a pager. When a callout is initiated the Team Leader or Deputy will send a message to each members pager with brief details of the callout, and rendez-vous point. Our pagers will often work in areas that have no phone signal.

Handheld Radios
Each full team member has a personal radio set that operates on Highband with licensed frequencies for Mountain Rescue - the range of the radios is 5-6 miles (but this is dependant on the terrain). As team members travel across the Lakes and operate with other teams, they are able to move between frequencies to comminicate with the RAF, and other teams.
The radios have a GPS microphone attached which allows the controllers to keep track of members movements during searches.

GPS's
Team members rely mainly on navigation with map and compass - however, the GPS can be a useful tool when in bad weather conditions to pinpoint locations. It is never recommended to rely soley on a GPS.

Vehicle Radios
Each of the three team vehicles is equipped with a high output radio to ensure they maintain communications with base and team members - often a team vehicle will be used as a command centre when on callouts. The vehicles, like team members are equipped with GPS tracking units enabling us to know locaiton of a vehicle at any time.