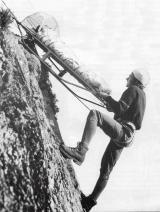 The team is saddened to announce the recent death of Vice President, Peter Greenall

Pete was variously an electrical engineer and also manager of Ambleside’s Climbers Shop. He was a very knowledgable climber and was renowned for his sense of humour

Peter had retired to Spain, but remained team Vice President from 1977  until his death