Snowmageddon... well not really, but a multi-vehicle incident on Kirkstone Pass during a period of snowfall occupied ourselves, Patterdale MRT, police, ambulance and Fire and Rescue Service for several hours. Two injured people were released from an upturned vehicle and evacuated by stretcher to our vehicles and then transferred to ambulances waiting at lower levels. A number of other vehicles were also trapped on the pass, so their occupants were evacuated to the Kirkstone Inn 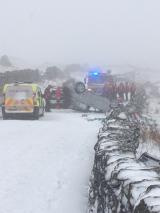