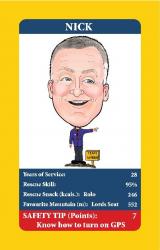 Nick joined the team in 1992 after a few years with Kendal MRT, while living in Kendal. He manages a hostel in the Langdale valley. In any spare time he has, Nick enjoys climbing, swimming, cycling, and being rubbish at triathlons.

He has served the team in a training role, as Equipment Officer, Deputy Team Leader and has been Team Leader since 2005. He is also responsible for the team's website, being a master at copying and pasting, and where his inability to spell or proof read finds a very special home.